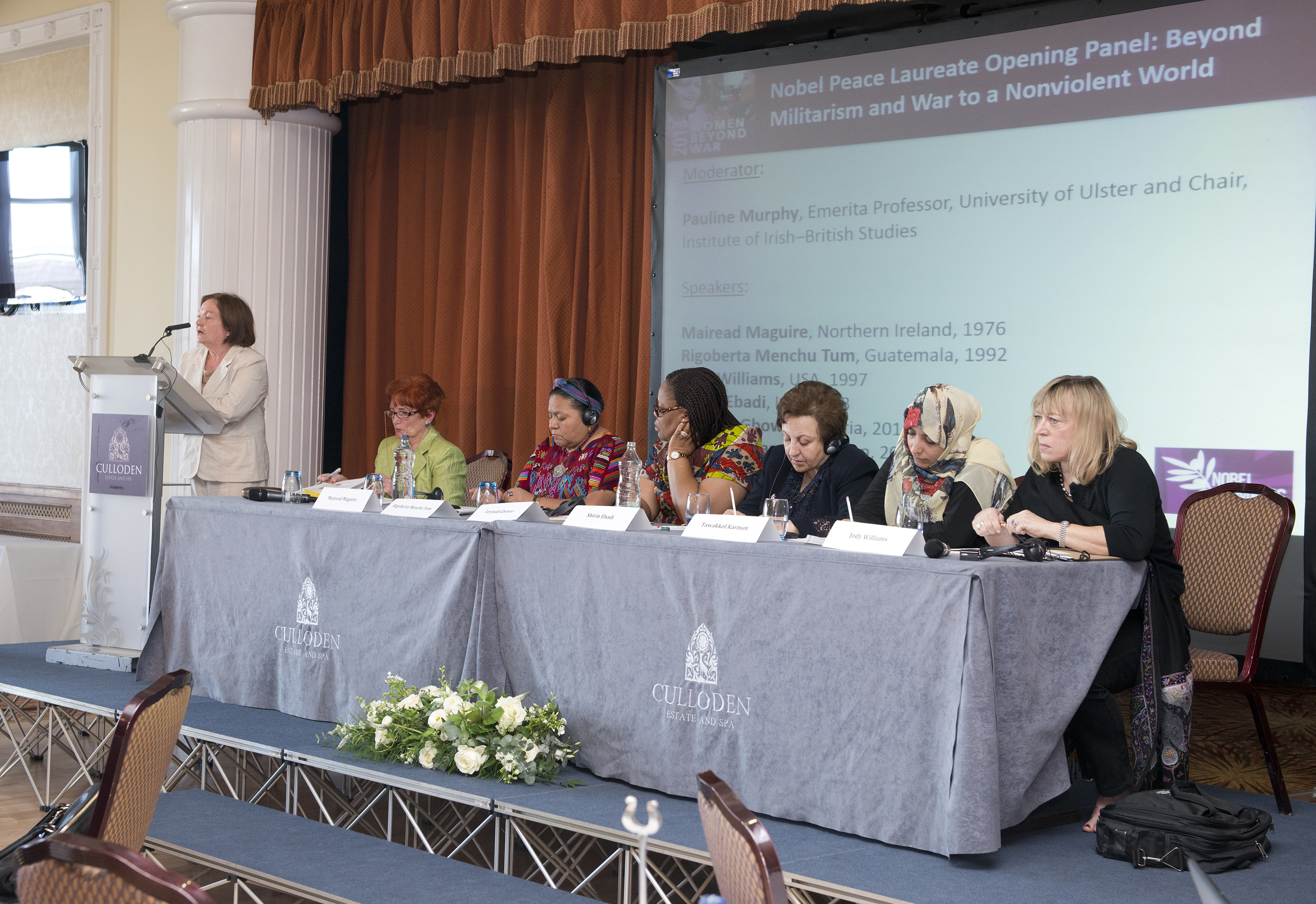 The six members of the Nobel Women’s Initiative, who gathered in Belfast, Northern Ireland for a historic international conference to discuss strategies for a nonviolent world, made their appeal ahead of the G8 Summit in Northern Ireland on June 17 and 18.

In a statement released today, the Laureates of the Nobel Women’s Initiative called on the G8 leaders, who will be meeting at a Summit in June in Northern Ireland, to reduce military spending. “We strongly urge G8 states to decrease military spending,” urged the Laureates, “Redirect the investment to education, training and social services that will improve livelihoods and address the root causes of violence.”

Over 100 activists, academics, journalists, philanthropists, policymakers and community leaders have participated in the Nobel Women’s Initiative biennial conference, “Moving Beyond Militarism & War: Women-driven solutions for a nonviolent world” which was held this week at the Culloden Hotel near Holywood, County Down.

The three-day conference has provided peacemakers with an opportunity to analyze governments’ rising dependence on militarisation, including the ‘war on terror’ and ‘war on drugs’. It also offered peacemakers the chance to share the innovative tactics and strategies they employ for nonviolence and peace.

“Our world has been ravaged by conflict, time and time again. And yet, instead of investing in our women, children, and future generations, our states continue to spend more money on our militaries — a solution that has failed to increase the human security of those at risk,” said Mairead Maguire, who won the Nobel Peace Prize for her work to help end the conflict in Northern Ireland.

During the United Kingdom’s presidency of the G8 in 2013, ending sexual violence in conflict has been made a priority and focus, with a Declaration on Ending Sexual Violence in Conflict at the Foreign Ministers meeting in June. However, significantly more needs to be committed by G8 leaders—and other nations—to support women’s rights and women’s security.

Militarism is a state’s military readiness and includes such factors as maintaining an army or developing advanced weaponry. While conflicts are ongoing throughout the world, militarisation occurs when a state deploys their military resources to combat perceived threats, which include conflicts over political power, natural resources, or sections of civil society. Globally, militarisation—and military spending including the advancement of new technologies—has risen substantially, while social services budgets continue to decrease. On the frontlines, women overwhelmingly feel the impact of these changes and struggle to overcome the challenges left in their wake.

Despite tackling stopping rape in conflict, G8 nations continue to be the highest arms exporters and among the largest investors in new weapon technologies.

“We have seen significant progress on the awareness of how conflict impacts women around the world—from the prevalence of rape to the destruction of land and increasingly unequal distribution of resources,” said Nobel Peace Laureate Jody Williams. “Our gathering this week was a critical opportunity for a different sharing of stories: what successful strategies are being implemented to end the violence. Over the past two days we have heard example after example of inspiring and creative tactics women are using to take nonviolent action.  These are the people governments should be supporting if they are genuinely interested in ending conflict.” 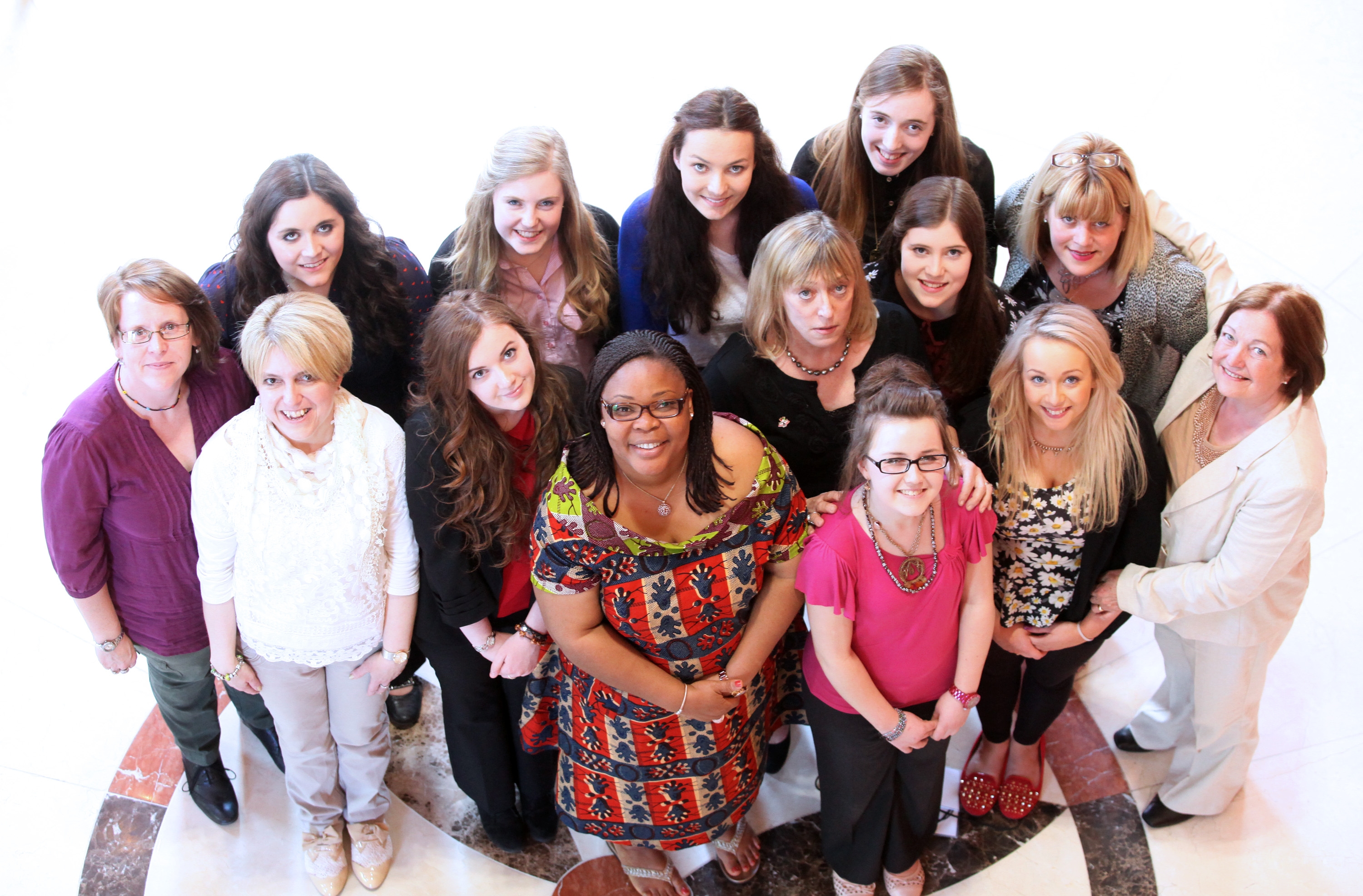 Young women follow in the footsteps of the Nobel laureates

Young women follow in the footsteps of the Nobel laureates